Andrew W.K. (b. 1979, California) is the KING OF PARTYING. Infamous for his bloody nose. Famous for his high-life attitude. Beloved for his party songs and super-energetic personality, Andrew's true will is to create feelings of pure joy, fun, and possibility for as many people as possible. He wants to make the world a partier place, and bring people the partiest experiences he can. Andrew W.K. is a multi-faceted musician and performer. Starting his musical career at age 4 with classical piano lessons, then exploring experimental and fine art interests, Andrew went on to create his own brand of extremely high-energy rock 'n' roll. His father, James E. Krier, is a Law Professor at the University of Michigan, and Andrew grew up in the open-minded Midwestern city of Ann Arbor. At age 18, after being accepted into The Art Institute of Chicago, Andrew decided instead to move to New York City and pursue art and music on his own. With the release of his first full-length album in 2001 - the controversial, "I GET WET" - Andrew was quickly recognized not only as a powerful musical performer, but also as an exhilarating and uplifting personality for a new generation. Using his feel-good abilities, Andrew released more albums, singles, videos, a live DVD, and expanded his work to include T.V. shows on MTV and Cartoon Network, motivational speeches at Yale, New York University, The Cooper Union School, and Carnegie Mellon, and syndicated advice columns in the USA and Japan. He also began producing music for other artists, including the Grammy nominated album, "Repentance", for reggae music pioneer, Lee "Scratch" Perry. In 2008, Andrew and his friends opened a large downtown New York City music venue and nightclub called Santos Party House. The club won numerous awards in its first year and continues to host the best in dance music and live bands. He is also currently writing his first ever book, “THE PARTY BIBLE”, to be published by Simon and Schuster. Andrew lives in Manhattan, New York City. 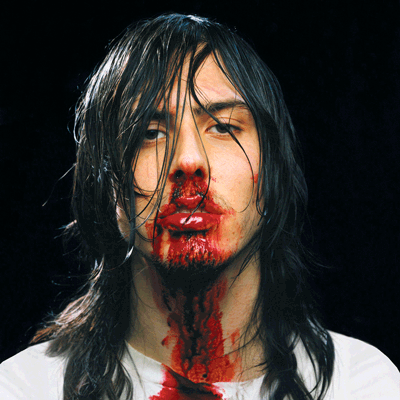 Founded in November 2004, Current Space is an artist-run gallery, studio, and a headquarters for cultural production, nourishing an ongoing dialogue between artists, activists performers, designers, curators, and thinkers. They are committed to showcasing, developing, and brooding the reach of artists locally and internationally. Current Space is open 12pm-4pm on Saturdays and Sundays and is located at 421 N. Howard St.